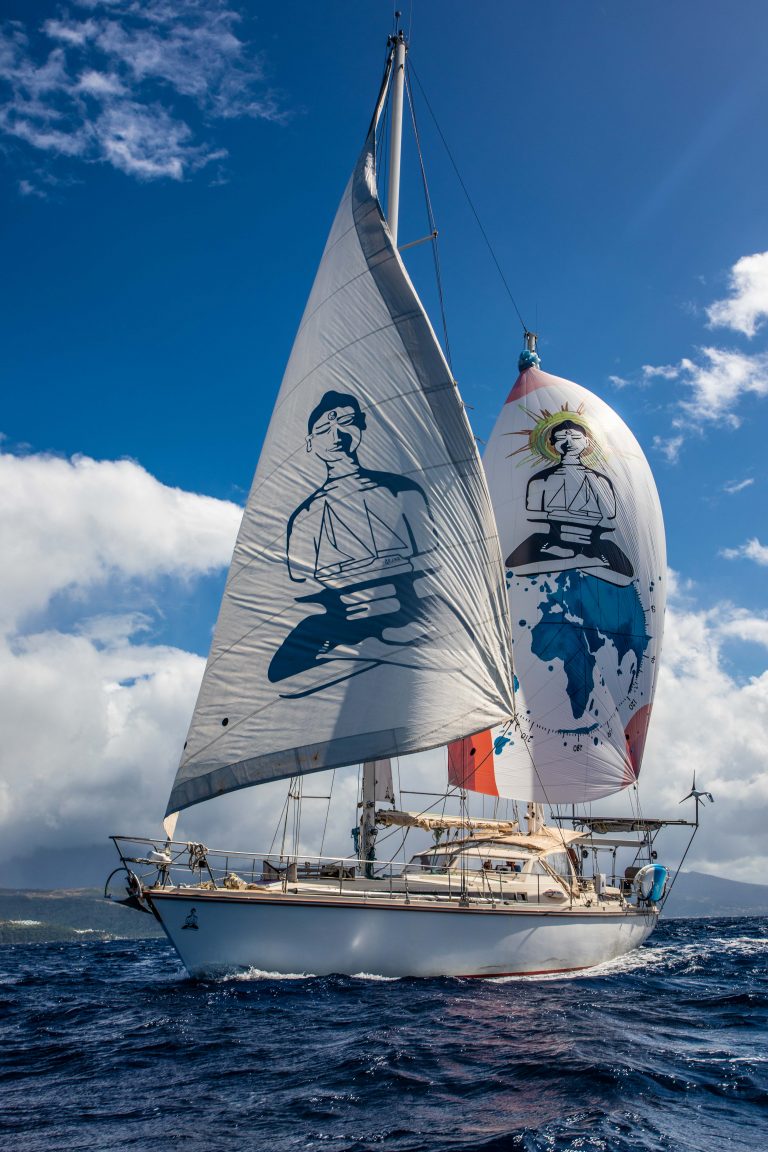 STOP THE WORLD, I have TO GET off

One man’s ocean sailing dream has inspired a following of 130 million YouTube viewers. Brian Trautman of SV Delos spoke to Dick Durham on passage from the Bahamas to Maine.

Night is falling, the wind is increasing, the seas are building and as Brian Trautman decides to head further out into the ocean in a bid to avoid the worst of an approaching storm, you could forgive him for thinking that dumping his day-job was a bad idea.

But the former computer services executive, who sold his home, gave up his 70-hour-a-week business, and left behind a broken marriage for the sea, knows there is no turning back, either on passage from Cape Town to Reunion Island, or in life.

‘It’s going to be nasty and uncomfortable,’ he tells his crew, reassuringly, ‘but not enough to make it dangerous.’

His boat, Delos, a 53ft Amel Super Maramu, leans to the howling 50 knot wind, her lee rail awash. The lowering sky is a grey rag, the hissing seas mountainous, between them the last of the day’s light is squeezed into a dying, angry flare.

The engine powering the reefing system breaks down, the bow thruster starts leaking into the bilge from the pounding seas and a knockdown breaks loose a loudspeaker from the saloon sound system which almost hit Brian’s brother Brady.

One of the novice crew opens a galley window and gets a wave in her face, another is sick in a bucket, and the autopilot’s gearing packs up: the teeth worn down to a gummy housing with no grip.

How do I know all this?

Because I watched it on the SV Delos YouTube channel along with millions of others, not to mention the site’s 505,000 subscribers.

The videos are watched in 195 countries with the greatest hit rates coming from nations as diverse as the Philippines and Australia and with support coming mainly from the US, the UK and Scandinavia.

By support I mean cash, because although the videos are free to view, people are invited to throw Brian and his crew online cash to keep ‘em coming. And at 14,000 US dollars a time, they clearly do want them to keep coming.

The site has published more than 200 of them from adventures including sailing around Indonesia, Mexico and Brazil, through crew dramas such as getting bitten by a barracuda, to techy stuff done with a light humorous touch such as ‘Watt the hell is an amp hour?,’ ‘Hello lithium, goodbye propane’ and explanations of weather routing.

So popular has Brian’s story-telling proved that mainstream TV stations have offered big cash to turn his escapades into a reality show, which to his great credit, Brian has turned down.

So, does he think his viewers feel morally bound to pay for all the enjoyment his hedonistic lifestyle brings them?

He laughs: ‘Do you feel morally bound to pay a waiter a tip if the meal has been good and the service a joy? If someone tells you a story in a pub that makes you laugh, do you buy him a beer?

Brian, 44, has taken time off watch aboard Delos on passage for Maine from the Bahamas, first stop New York, to tell me how he turned sailing the dream from platitude to latitude.

Brian had a plan back in the early 2000s to leave behind the corporate world and take an 18-month sabbatical to find himself.

‘At the time the only thing I enjoyed was the bus to and from work,’ he said, ‘It was the best part of my day, the only time I could listen to music, look out of the window, be myself. The rest of my day was answering 150 emails and having 10-minute breaks between 50-minute schedules.
I wondered if this was it, for the rest of
my life.’

Then the 2008 crash came along and brought forward Brian’s plan. He wanted a boat, ‘so that I could carry my home with me from country to country with all the creature comforts and not worry about booking hotels.’

He bought Delos, named after the Greek island birthplace of the God Apollo, and they sailed away arriving in New Zealand where Brian and crew started working on superyachts for 200 dollars a day to fund their next voyage.

‘We were like seasonal workers just bumming around.’ Then one day a friend suggested they make videos of their unconventional life and they did so, thinking that family and friends would enjoy them. Brian’s mum and dad reacted by asking when he was going to get a proper job, but others were watching too. And when one entrepreneur suggested they could monetise their video diaries the rest became history.

Brian’s 18-month sabbatical became a 12-year odyssey of 70,000 miles of blue water sailing across the Atlantic, Pacific and Indian oceans.

On his website Brian has deliberately juxtaposed a photograph of him as a geeky office worker and a piratical-looking ocean rover. The transformation is remarkable: as though Colonel Bilko had morphed into Conan the Barbarian.

He now has a team of people ashore doing all the sort of legwork, Brian escaped from: answering Facebook questions dealing with Instagram, editing videos, re-styling blogs.

‘For a long time, the world has been saturated with sailing videos, but many people aren’t interested in sailing, so we tell stories about people we meet, places we’ve been, about self-sufficiency, and other sports such as scuba-diving,’ he said.

Brian’s living costs are low, although wife Karin, from Sweden, has recently produced a baby girl and the boat is 20-years-old.

However, Brian was left unimpressed with the craft on display at the last Annapolis Boat Show.

‘They all just looked like floating, fibreglass, IKEA apartment-style showrooms. They were all about living space which would be an absolute disaster at sea.’

Brian described Kraken Yachts as an ‘very interesting concept,’ and he is now talking to Dick Beaumont, Kraken’s Chairman about his next boat.

Soon the followers of the Delos way of life, will be viewing very different videos from the sun, sea, and sand idylls, they’ve become used to.

‘We’ve done a lot around the islands and beaches of the tropics and want to try something colder now“,’ he said, ‘we hope to make it to Nova Scotia in Canada and then Newfoundland, but we will have to wait in Maine to see if the Canadians will let us in. I don’t blame them if they don’t. I wouldn’t let in a boatload of Americans in the middle of this Covid-19 virus,’ he jests.

Before I watched the heavy weather video on the Delos site, I was full of scepticism for the social media diaries of those escaping the daily grind.

Afterwards I was full of nothing but admiration for Brian, his wife and their passengers. Anyone bemoaning his or her lot would do themselves a great service by settling down for some Delos magic. I guarantee they will be inspired to change the circumstances of their own lives.

You can follow the adventures of the Delos crew at www.youtube.com/svdelos