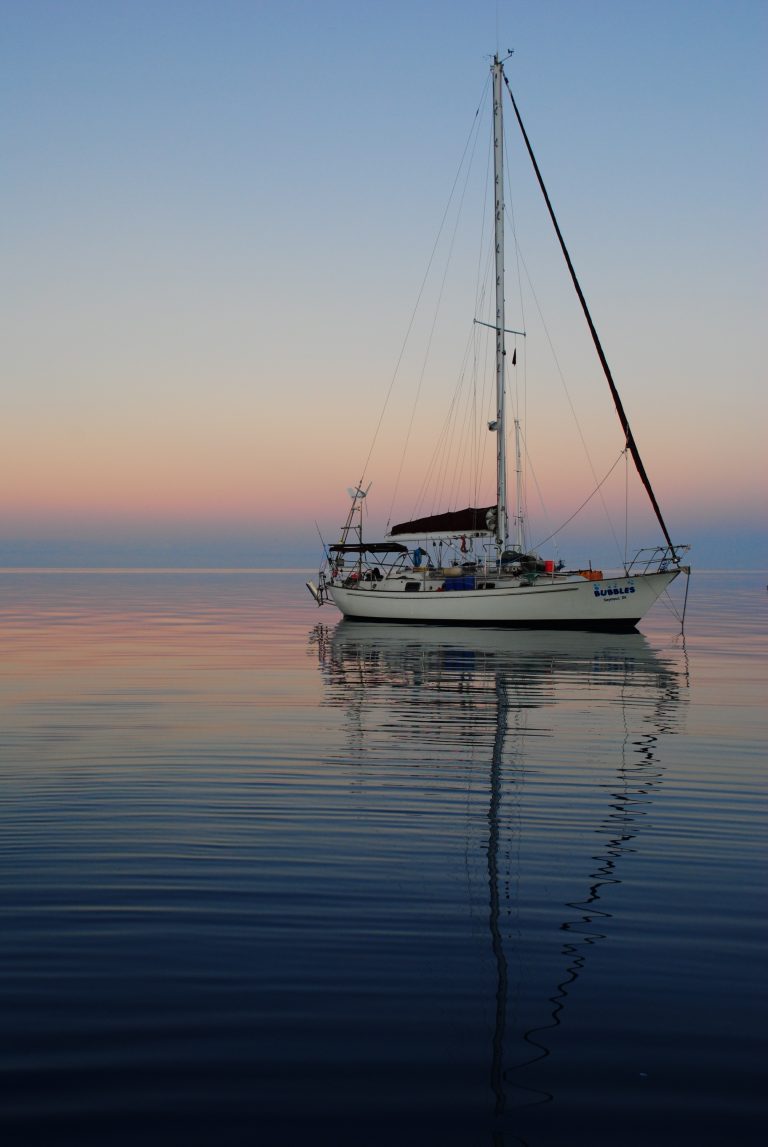 The father, the son and the sea

Alex Rust circled the globe trying to lay the ghost of his father. His circumnavigation resulted in Chasing Bubbles a YouTube Documentary viewed by over 1.3 million. Dick Durham discovers what motivated him.

When egg tycoon David Rust lay dying, one of his 13 children asked him what he wanted him to do with his life, ‘Whatever you want to do most,’ came the 78-year-old’s reply.

Young, tousle-haired, Alex Rust was perplexed. He had expected some tangible advice, a doctrine maybe, or a code of practice. After all his father had guided him through his young life: up at dawn fixing fences at the large family home in Indiana, USA, making breakfast on a rota,
doing chores.

‘Dad saw a lot of potential in Alex, but he knew he had a rebellious side so he pushed him very, very hard both physically and intellectually,’ Joe Rust, 29, Alex’s younger brother, told Ocean Sailor, ‘at just 20 years old Alex still had the open road ahead of him, but with Dad dying there was no one to guide him.’

David Rust had ‘two litters’ of kids, as Joe put it, the initial seven from his first wife, the next six, of which Alex was the second-born, with his second wife Sylvia.

‘Dad spent a lot more time with the second litter, as he was older. He wanted to develop our potential. He was a big achiever and maximised his time. He motivated all his children stressing the importance of a job, responsibility and respect. And he didn’t like us watching TV.’

David travelled the world garnering advice from top poulterers to ensure only the best eggs ended up on the American breakfast table. He realised how beneficial it was for youngsters to experience different cultures and distant places, so he took his family on extended journeys.

‘Dad was unique in that we would never fly anywhere. He was a great believer in the journey being more important than the destination.’

David drove his family by van from Indiana to Mexico City and up to Alaska in the Arctic Circle. And when the tearaway side of Alex started raising its head: police arrests for motoring offences, pranks towards teachers he didn’t like, going AWOL, David sent him to Brazil to stay with
a half-brother.

‘Dad knew he needed a change of environment.’

Four years after his father’s death, Alex was working as a financial trader in the Chicago markets when he had an epiphany; life was all about the journey, just as his dad had said, both physically and spiritually. He would get a boat.

‘If you had your own mode of transport you could really live the journey,’ Joe said, ‘that’s what dawned on Alex.’

He bought a 27ft Hunter sloop, Wild Sea Monkey, for $3,000 in Fort Lauderdale, Florida and the book Sailing for Dummies. He got a rope round the prop, watched his crew being sea-sick and ran aground nine times trying to leave port, but he made Bimini and the hook was set.

‘We didn’t even have maps,’ said Alex’s girlfriend Vanessa, gauchely. None the less she stayed with him throughout the hard learning curve of the Caribbean islands and the Venezuelan coastline, before finally jumping ship and flying home to Chicago. Alex sold the boat in Curacao, but the seed was sown.

Alex’s first requirements in a cruising boat were typical of the fellow’s exuberant nature: ‘I wanted a crow’s nest, a plank and a wooden wheel, like a pirate ship,’ he said.

But behind the showmanship was seamanship learned the hard way from his forays with Wild Sea Monkey. Alex was horrified to discover that most of the boats he looked at, offered by gimlet-eyed brokers, had liveaboard comforts like air conditioning, microwaves, and even carpets but despite these luxuries were not designed or built to cross oceans. He chose a boat with the same core characteristics as a Kraken yacht, integral keel, full skeg hung rudder and a raked stemmed bow.

The William Garden-designed Fast Passage 39, was a proven ocean yacht. She was one of only 10 boats to complete the inaugural round-the-world BOC Challenge Race in 1983. Alex bought one, Bubbles, for $70,000, and sailed the cutter-rigged sloop from Tortola to St Thomas in the British Virgin Islands and it was from there in October 2009 from Nanny Cay, that Alex set off for his global cruise.

Friends, acquaintances, and his new girlfriend, Molly Smith, joined him for various legs of the three-year voyage. This took him from Nanny Cay through the Panama Canal, across the Pacific and Indian Oceans, around the Cape of Good Hope and up the South Atlantic back to Nanny Cay via many stops on the South American continent. Joe claimed this was: ‘A record-breaking excursion up the Amazon, I’m pretty sure no yacht has ever been further up.’

The wild side of Alex, is always evident in the documentary, Chasing Bubbles. As his confidence as an ocean sailor grew, so too did his devil-may-care attitude and his childish sense of being a pirate.

Viewers are treated to scenes of tomb-stoning off uncharted headlands, swimming with tropical jellyfish, hand-feeding sharks, dancing around live volcanic lava streams, playing with snakes, and leaping from the cross-trees.

Joe joins the boat in French Polynesia and for a ‘magical few months’ sails with his brother to Fiji.

‘He was always a risk-taker from a young age,’ said Joe, ‘but it was a weakness, too. He thought he was invincible and he got a rush from surviving it all. In some sense,
he enjoyed the fanfare.’

One crewman is almost lost over the side: lifejackets and harnesses are rarely if ever donned; another narrowly escapes being decapitated during the night by an unshipped whisker pole.

There are questionable moments below as well: one crewman reports on the film: ‘I got the feeling women were passed around.’ And another: ‘It was like being in an extended party.’ It all adds to Alex’s mischievous image as being a latter-day Captain Morgan and throughout he remains popular with all. The cheeky broad face, the stocky build, the shock of blonde hair, the unkempt beard, the jokey seaside captain’s hat…one could see a young Oliver Read in the same role.

But then Alex is brought down to earth: an eight-day drift in the Doldrums which sees him yelling at clouds for hanging around the horizon and blaming it all on Bubbles instead of moving inshore and finding wind. The sunsets during those calm days bring back the directional stability: the overpowering sense of his Svengali father. Alex, beer in hand, another rubbing his head, tries to talk about the dad he worshipped, but cannot, his head drops, the tears well up…

By December 2012 the voyage is over. The journey has ended. And still, Alex was uncertain about what he is supposed to do with his life:

‘Maybe I was running from responsibility…or trying to do something great?’

Never mind the destination, it’s back to the journey. In April 2013 he visits the Dalai Lama, exiled in India, by May he’s moved on to India’s spiritual capital Varanasi, in Utta Pradesh from where his family receive his last email.

It was here the adventure ends. Alex died from typhoid fever aged just 28.

‘Definitely he was a daredevil devoted to conquering himself, to finding himself. His greatness was in expressing himself in an existential way. His remarkable example was what you can do with human life…of what are the true limits,’ crewman Paunu Aalto says ending the film while fighting back his emotions.

Alex Rust’s short life has produced the Chasing Bubbles Foundation, a charity being set up by brother Joe to ‘help find the inner kid’ in people of all ages. The work is starting in India where Joe followed his brother’s last footsteps, to help local youngsters achieve their dream.

Joe and I urge you all to watch this film at www.chasingbubblesmovie.com