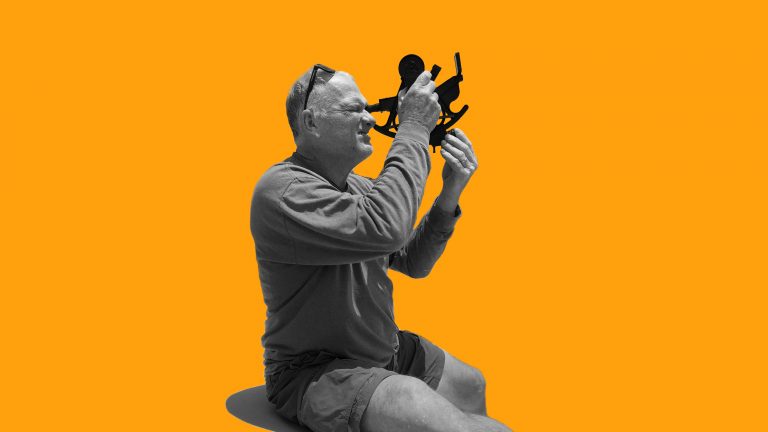 The man who never stops sailing

Many consider ocean legend, John Kretschmer, the world’s greatest authority on blue water sailing. As he prepares for his longest voyage to date: a five-year circumnavigation, Dick Durham manages to catch him off watch…

Click. When the numbers on John Kretschmer’s sailing odometer reached 300,000 miles, he stopped counting. ‘It seems absurd to keep tallying miles. I have nothing to prove and I am not convinced they matter that much. They define sailing as the distance between landfalls as if the land’s edge defines the ocean and our relationship with it…but it’s the in-between that matters…that’s where the magic lurks.’ So speaks a man to whom the world of blue water sailors turn for training; he has made over 130 offshore passages with neophytes paying up to 12,000 US $ a time. As an orator and a lecturer, yachts-men/women all over the globe, from the Royal Hong Kong Yacht Club to the world’s oldest, the Royal Cork in Ireland, have booked him for lectures. The prestigious magazine, National Geographic, described him as ‘a sailing guru.’  Even cadets at the US Naval Academy take semesters for his guidance.

What makes Kretschmer different from so many hoary, old shellbacks (an old or veteran sailor) is that the sea has turned him into a sage. Just about anything he writes or says strikes you as authentic, intuitive: the Truth. Any man who can pen: ‘There is nowhere to hide at sea and the image that reflects back at you from the face of a steel blue wave is brutally honest. To thrive at sea, you must take stock of who you are, not who you want to be. There’s no pretending out there,’  has a soul nurtured by the ocean.

I manage to catch the 62-year-old voyager aboard Quetzal, his Kaufman 47 cutter, as he organises paying hands for ‘the big one’ as he puts it, a five-year longitudinal as well as latitudinal circumnavigation, well almost, the longitudinal legs will take in Greenland and Antarctica, the east-west legs, Polynesia to South Africa. It all starts in January 2021 with his wife Tadji, sailing with him as mate.

‘I started as a dinghy sailor,’ the Detroit-born skipper tells me, ‘we had a little Sunfish when I was 12 or 13 and then briefly a Sabre 28 on the Great Lakes, where the seed was planted.’

His father died suddenly and unexpectedly, which brutally underlined a sense of mortality in the young Kretschmer, who dropped out of college, where he was a successful athlete and instead took to reading all the sailing magazines and books he could get his hands on.

Sir Francis Chichester’s book, Gipsy Moth Circles the World, was one. ‘I read it like it was the bible. Looking at that picture of Gipsy Moth rounding Cape Horn with just a spitfire jib stayed with me.’ Sailing Alone Around the World, by his fellow American, Joshua Slocum, was another, but his all-time favourite remains, Alone through the Roaring Forties, by Argentinian sailor, Vito Dumas.

By his late teens he was brimming with the adventures of Bernard Moitessier, Robin Knox-Johnston and later Trevor Robertson, sailor of the steel gaffer Iron Bark, who was to become a good friend. He was also, by now, broke, but his mother, Leanne, told him: ‘Whatever you make sailing in six months I will match.’ Kretschmer had discovered he was a natural athlete but he recalled the sailors he’d seen on the Great Lakes; ‘middle-aged men screaming at each other while racing,’ and knew that competitive sailing was not the sort of sailing he wanted to be involved in.

He bought an engineless yacht, a Bristol 27, shipped it to Florida and learned tidal sailing as he ‘ran aground on every sandbar from Miami to Key West,’ often jumping overboard to push her off. He also learned celestial navigation which led to him teaching others at a navigation school.

Kretschmer began to earn a living delivering yachts. In time he would deliver yachts from his adopted home in Fort Lauderdale, Florida to Japan, Indonesia and the Baltic Sea. In 20 years of deliveries he has made two Pacific and 26 Atlantic crossings. In one period of 10 years, he spent only 30 days ashore! His adventures have included sailing into a Yemeni coup, surfing waves in a Gulf Stream storm and drifting for weeks in a dead Pacific calm.

It was in 1984 he gained worldwide fame for his passage in Gigi, a Contessa 32, from New York to San Francisco, doubling Cape Horn east-about, the ‘wrong way’. During this passage, he came close to death when Gigi was knocked down in an ‘awesome’ storm and the mast went 130 degrees from vertical. Kretschmer was thrown overboard, but as the boat came up his harness flicked him straight back on deck as, ironically, there was now no guardrail to prevent his return; the sea had caught the dodger and flattened the stanchions to the toe-rail. Having rounded the Horn, he spent 75 days on one leg, without coming ashore, thanks to an El Nino calm, a feat of Confucian mental rigour in a boat as confined as a Contessa 32.

‘The appeal of offshore voyaging is challenging to explain, even to some fellow sailors,  who think the notion of spending days or weeks at sea is a form of waterboarding, some kind of self-inflicted torture,’ he says, ‘but for those of us who understand, who relish intimacy with the untamed wilderness that is the ocean and embrace self-reliance and individual expression while accepting the dispassionate whims of Neptune, this is the good life.’

Nevertheless, as he looks back over that passage, he says: ‘We were in way over our heads and it was the Contessa 32 which bailed us out time and again.’ That’s because, even though small, she was the right boat, with an integral keel and skeg-hung rudder, features which Kretschmer now refuses to sail without. When they arrived in San Francisco it was a ‘slow news day,’ as he modestly puts it, and he and his crew achieved a certain notoriety on TV and in the press. From it came a book, in 1986, Cape Horn to Starboard, which proved very popular especially in the UK where the Contessa 32 was born and where 800 were launched.

Other books have followed including his best-seller, Flirting with Mermaids, which to date has sold more than 50,000 copies worldwide and which covers yarns funny and tragic garnered from his years as a delivery skipper. Kretschmer has sold the film rights to Sailing a Serious Ocean and also At the Mercy of the Sea, the sympathetically narrated, but harrowing story of three sailors who ploughed into Hurricane Lenny.

His latest book Sailing to the Edge of Time is reviewed in Ocean Sailor this month (see Mariner’s Bookshelf).

Now, as he prepares for next year’s great adventure, he tells me: ‘These passages are anything but a sailing school, instead they are a shared adventure, which empowers people.’

He takes stock of his trusty yacht Quetzal, named after a tropical bird which looks like a cross between a parrot and a woodpecker. The Kaufman 47 has an integral keel, skeg-hung rudder, features that Kretschmer considers mandatory for any boat that will cross oceans,  she also has a raked stem and sawn-off counter and relatively shallow draught, so she’s not too long-legged for estuarine exploration. Kretschmer has sailed her hard: at least 8,000 miles every 12 months for the last 16 years, including 10 Transatlantics and lately he has been weighing the options of a replacement in the not-too-distant future.

I asked him what he would go for, come the day?

‘The Kraken 50 is the perfect boat for me and my business.  I really share Dick Beaumont’s philosophy about yachts. What I admire about him is that he never trots out that old line about every boat being a compromise. He knows what he knows through hard sailing and that is not about compromise. The Kraken yachts are super cool, their starting position is based on maximum seaworthiness, but they are also really functional and great-looking too. They are undoubtably the best blue water sailing yacht in production today.’

‘The trend of the major yacht manufacturers today is that they are producing flat water sailing boats with the emphasis on accommodation, calling every white piece of plastic a blue water yacht, just following the fashion of the day. They all do it and it comes to something when a Hallberg-Rassy and an Amel are no different to a Jeanneau!’

As for the twin rudder concept, Kretschmer, pulls no punches: ‘I’ve sailed the lower end production boats with the twin rudder system and they sail so poorly…the performance is so disappointing. It’s as though the manufacturers have said: “Well you’ve got two of them so they only need to be half the size”!’

Off the coast of Maine there are two million, three hundred thousand lobster pots, and, says, Kretschmer: ‘If you take your eye off the horizon for 30 seconds, you’ll have an encounter with one of them.’ Some friends of his with a Garcia 47, also with un-skegged twin rudders, had to cut lobster pot wires free three times in one season off that coastline. ‘And each time that required diving over the side in cold water. What they would have done if they couldn’t dive, who knows’?

I tell Kretschmer how I’ve covered stories in the past about inexperienced couples setting off to cross an ocean, losing their steering, and calling emergency services for assistance. Amazingly  when it arrived,  they called their insurance company to make sure their policy was met, before abandoning their craft.

‘That attitude drives me insane,’ he says, ‘it’s the same with those who doggedly follow weather predictions. I silently cheer when an unexpected blow rolls in! My good friend Trevor Robertson always tells people to ask themselves this: “Would I go if I knew rescue was not an option?”’

Finally, Kretschmer tells me it was the death of his father that set the clock ticking for him: ‘You can’t trust time. You must live as profoundly and honestly as you can. What can be more important than managing your allotment of time?’